These past few months I’ve been working on a comic. I’ve completed the first part of the comic, but I don’t plan on making it available until I’ve completed the story. The comic is a sci-fi story about alien encounters. Ideally it would be a serial with a different alien race in each chapter. The first chapter’s aliens are gigantic ants. I wanted the aliens to be insectoid because usually in movies and assorted media, they have an insect-like appearance. I ended up pretty much just copying ants instead of designing a totally new creatures because i didn’t like my alien inventions. Creature design is something i’ll need to work on. Also for the comic I decided to draw in a style that was a bit more “gritty”, with more lines and details than I usually draw. It’s a new style I’m trying to develop just for this comic.

Once I’m finished with this “ant” chapter (i only finished 40 or so drawing for the first chapter) I think I’ll create a separate site and publish the comic online.
Here are some images from the comic: 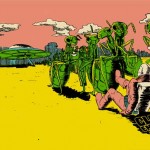