Went to do some life drawing at the Spring Street Studio. In many ways I prefer the studio over the Art Student League, where I went last November. My main gripe against the life drawing classes at the league were the amount of long poses. Any pose over ten minutes long, to me, is a long pose. Imagine my horror, when I realized that the two thirds of the class was spent on poses twenty minutes long and ABOVE! But a forty minute pose was nothing compared to what was officially understood as “long pose”. A long pose lasts two weeks, which just boggles my mind. But I guess I should gripe in another post.

So this time at the Spring Studio, they had 20 1 minute poses, and twenty 2 minute poses, which was the most rapid poses I’ve ever drawn in one sitting. The model, a guy, was pretty flexible and had a lot of dynamic and unusual poses. I usually find that male models don’t do as many contortion-y poses as women, but this guy was an exception. BRAVO MODEL GUY! BRAVO!

The drawings below show a range of poses, from two minutes, to ten minutes 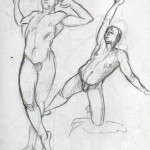