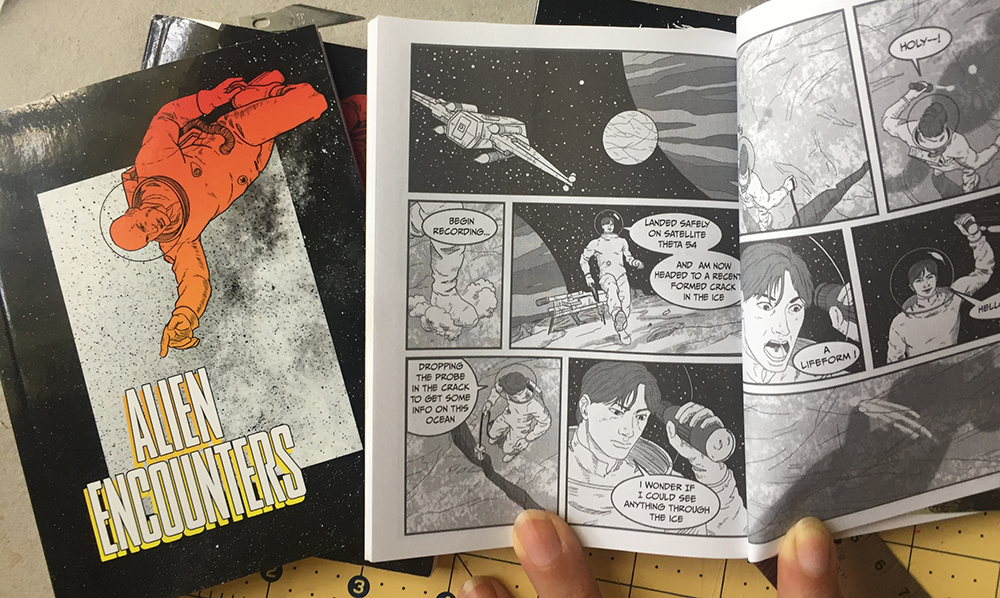 I recently finished a comic that is now 10 years in the making. That comic is titled “Alien Encounters”. Much like my prehistoric books, it was also envisioned as a series, but one that hasn’t been as successful as my prehistoric series. I had created a silkscreen version of that comic 10 years ago, but people were confused with the ending of the comic, so I thought I should redo it. Not only that, but I wanted to mimic Moebius’s more detailed comics for the new version….that turned out to be an awful idea because my skills are subpar compared to Moebius. Working on one panel took a LOT of time, and I had other books to work on, so I put it aside for a long time. But having unfinished work was eating away at me, so I resolved to finish this comic one way or another. That means, I had to accept that I didn’t draw as well as I wanted to, and that I just suck at a lot of aspects of comic book making. So this is my confession that the comic doesn’t look great, but at least I finished it. 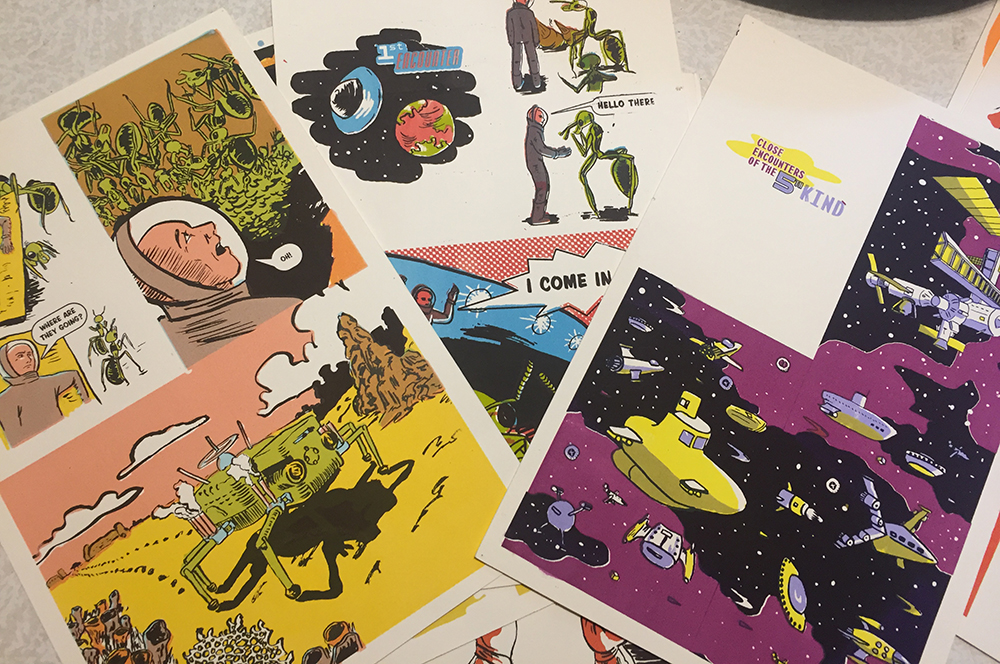 So to explain a bit the concept of the comic: humans are sent out all over space to discover life on other planets. Every story follows a different astronaut who makes contact with the natives, who may or may not be intelligent. So far I have completed 8 stories: 6 very short 2-4 page comics, one long comic, and  one 3-d anaglyphic book. The overarching idea is the different ways in which communication with aliens would be difficult. The long form story, which is the first chapter, has aliens that look like ants but have similar perception as human beings, which is to say they’re intelligent, have a language based on sound, and have pretty much the same senses as humans. The following short stories have weirder aliens where communication is pretty much impossible (which is why they’re short stories). Also, since the overarching theme of the series is communication, the long form comic involves a bit of lo-tech “decryption”: you need a mirror to read what the aliens are saying in the long form comic. 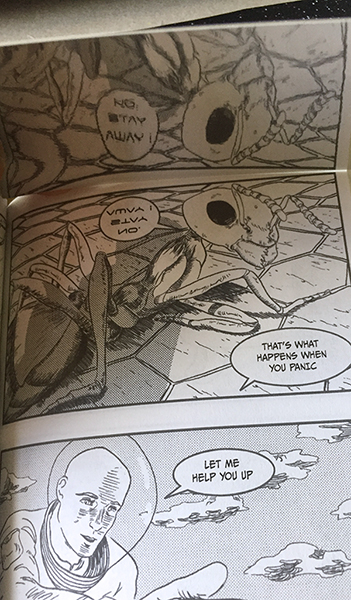 The reason I wanted to do a story about aliens is that, as someone with the name of a star, I feel it is my duty to learn about space. I am afraid of space, so I would never be an astronaut, but it is interesting. One topic in particular that interests me is extraterrestrial life. I’ve read a few things on the topic, and scientists believe that if we made contact with extraterrestrials, life on Earth would change completely. I’m a bit more of a skeptic, and that’s because we already have very strange creatures here on Earth that we don’t give a shit about. Granted, we’re the only intelligent beings on Earth so hypothetically, a conversation with a dog would be pretty boring. But I imagine “What if dogs were intelligent? How would relationship with dogs differ? Dogs have a much stronger sense of smell than we do, whereas we are more visual creatures, so there may always be disconnect in our communication since we don’t share the same perception. And a dog actually is pretty close to us on the evolutionary tree, and lives in the same world as we do. Not to mention that since we can’t really communicate with dogs at their current low intelligence, why would we be able to communicate with something potentially smarter than us? ” So, you ask me, if we got a signal from an alien, it will probably change nothing…we’ll just know for a certainty intelligent life is possible in other parts of the universe, except for the ultra-religious and conspiracy theorists. Incidentally, thinking about talking to animals is part of the reason why I designed some of the aliens as ants, to highlight the idea there are already creatures on earth we could practice communicating with but most of us don’t even care to.

To close this post: the comic is available as a print comic from my shop, and as an ebook from Amazon. For the ebook version, you don’t need a mirror to translate the aliens. After testing the comic with my family, the consensus was that it took to much effort to read from a mirror.