Last week I bought a very cool 3-d silkscreened book from Dernier Cri. It’s possibly the first time I’ve seen stereoscopic images that “work”. By the way, by stereoscopic I’m referring to images that need to be seen with red/blue lens glasses. So I bought the book to figure out how it was made. Below, you can see the 3d image I came up with (I recycled the image I did for the Comic Zine party) 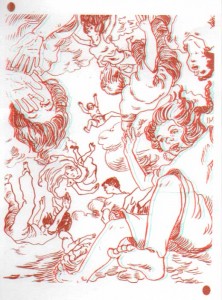 It’s actually pretty simple to do. The idea is for the blue ink to disappear when viewed with the blue lens, and the red ink to disappear with the red lens. I printed my original drawing with the red ink. Then for the blue ink, I first modified the original line drawing on photoshop. I selected the braided girl (and a couple of other characters) and moved her further to the right. Then the clouds I moved to the left. I printed this modified line drawing on top of the red ink drawing and voila: 3d image. I used two dots on the corners to help me align the pictures on top of each other.

So here are a couple of things to know before setting out on your own: First, mixing the right colors is important for the effect to works. The blue ink needs to be very transparent in order to disappear under the blue lens. Which reminds me: both inks are transparencies, when they overlap, it makes a dark red color.
Second, the more the images are staggered, the more it seems to pop-out or recede. In the image below, you see the dark red line in the middle (which represents the blue and red line overlapping) represents the middleground of the picture. As the blue line moves to the right of the red line, it pushes the line to the foreground. If the blue line moves in the other direction, it pushes the line to the background.

So that’s the jist of it. I don’t want to delve into the mechanics of why this works, and there are still a couple of things I’m not sure about… like how far apart you can stagger the drawings before your brain/vision shuts down.