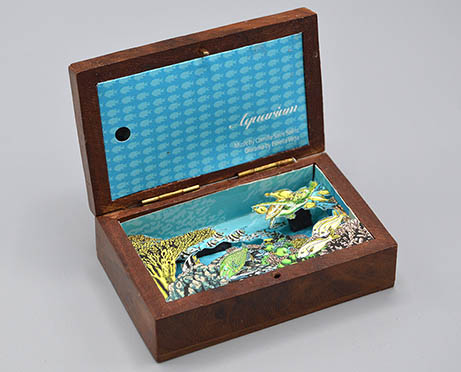 I finished a new project. It’s a music box/diorama. Check out the video here to see it in action. Before I get into the whole “inspiration/process”, let me do a quick plug that you can buy the one model I have in my shop.

Okay, so with that out of the way, let’s talk about the “creative process”. I’ve made paper dioramas of underwater scenes before, but I wanted to revisit the idea because I’m fascinated by Polly Pocket as a concept: jamming little worlds inside boxes. Paradoxically, I’ve never had Polly Pocket toys, nor did I want Polly Pocket toy because I never really played with dolls (I like stuffed animals better, which I guess explains why I draw so many animals). In any case, all this to say I often get inspired by toys.

As for the diorama itself, I did the illustration on the computer and just printed it from my printer. I usually silkscreen things, but given how small the design was, it would have been difficult to silkscreen. First, I glued the background to the box, and I cut the different layers of the diorama. 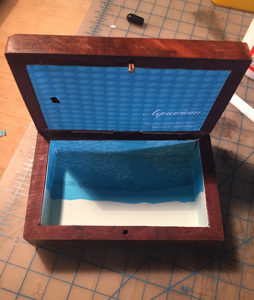 Then I glued small pieces of foam core to the back of each layer to give a bit of support to the paper and to place the layers at the same distance from each other. 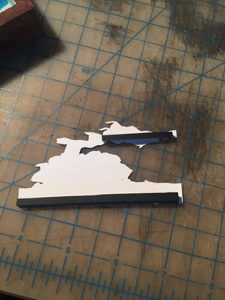 Then I just glued each layer on top of each other. By the way, the hole on the top lid is for the light sensor. 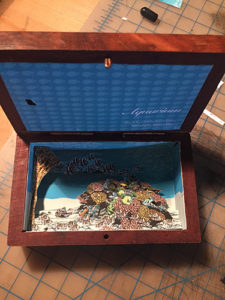 As for the subject matter, I chose to, once again, do an underwater scene probably because I’m a Pisces. Seriously though, I find it calming to watch fish in aquariums. I, unfortunately, can’t own any fish because I travel. So that’s my paper aquarium in a box. I also wanted it to play music because I like music boxes. Ideally, I would have preferred to use an actual music box that you crank, but I had to settle for a sound module. Just as an aside, I’m currently taking a class to learn how to build automata, which hopefully will teach me how to incorporate music boxes to my dioramas. Anyway, my consolation with the sound module is that I could record the music I wanted. In this case, it’s “Aquarium” by Camille Saint-Saëns.

Progress on other projects

Before I end this post, let me just say I am currently working on the next accordion in my prehistoric book series. I’ve got four panels 80% finished, and the others are lightly penciled. I’m attempting to complete one spread a week, so I can get this finished soon and then dive right into the Jurassic.

Other projects I have in the works is converting one of my older books into a Kindle ebook and finishing my “Alien Encounters” comic once and for all. So those are my projects for the near future (fingers crossed). I’ve got one thousand and one other ideas for projects fermenting in my head.