That dress picture with the “ambiguous” colors that’s been circulating has started to bother me…well mostly the people who say it’s blue and black. Am I missing the joke? They’re trolling right? How can you possibly see black on that dress?

To finally put this to rest, I employed Photoshop to sample some colors. As you can see below, the original swatches show a pale blue-ish color, and a sandy brown. Both those colors can be “mimicked” by overlaying either a pale blue or pale gray on top of a white and gold color. Obviously, it’s not a 100% match because I’m using Photoshop to approximate reality, and mimicking real colors takes more than just using a multiply layer. 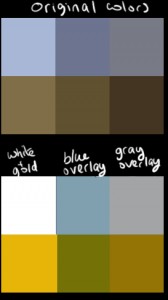 On top of that, I color corrected the image. In the center you have the original image, on the left you have it color corrected to make the “brown” black (basically, that would be correcting for an image that’s overexposed), and on the right it’s corrected to make the “pale blue” white (correcting for underexposure). Making the brown into a black required me to “destroy” more of the picture than making the blue, white. Also, the background in the original photo is very bright, meaning the dress is backlit, meaning it’s in shadows, ergo ipso facto, it’s white and gold 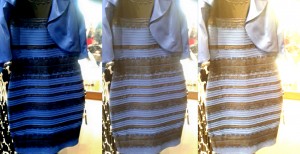 According to the New York Times, the dress is blue and black because there’s another picture of it that shows it to be blue and black. Here’s the thing: it’s another photo. That dress probably comes in different colors. I say this because the saturation of the colors on both dresses are COMPLETELY different in both pictures. Basically, to get the dress in the famous photo to look like the blue/black one in the article, I’d have to color it with the brush tool, otherwise I’d be destroying the picture. So there you go. Let us never speak of this again.