I went to the Brooklyn Art Library this weekend to look at the traveling exhibit “the Sketchbook Project“. Somebody suggested it to me, so I managed to go before it left for the next city.

Going into the Art Library, I was a bit confused with their setup. You have to sign up on their computer, and get a library card that allows you to check out sketchbooks (which you can only view inside the “library”). The librarians pull out of the shelf the requested sketchbooks. Problem was, I had no idea what type of sketchbooks they had, nor was there any sort of sketchbook catalogue (that I noticed). I just told them to get me any random book. The two random books they got me didn’t impress me. I ended up just looking at books people were dropping in the “return” bin. In short I didn’t really find the experience “user-friendly”. The librarians themselves were nice, I just wished it were easier to look at the work.

I did find some nice sketchbooks, but I couldn’t find the artist’s name anywhere….until i realized it was on the back cover in tiny print. Some artists seem to avoid recognition of any sort. Just write your name in big letters on the front! There was a wide range of sketchbooks: some had collage work, some were mostly text, some were heavily textured etc… Below you’ll see some pictures of sketchbooks. Overall an interesting experience, but I hope next time they’ll have an exhibit that’s more accessible. 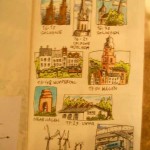 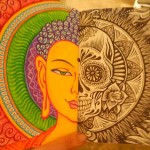