About a year ago I saw amazing wildlife footage of gannets fishing sardines underwater. (Seriously check it out! It also has sharks, dolphins, and a whale! It’s the most awesome wildlife footage ever!)It’s somewhat surreal to see birds “flying” in the sea. I’ve been wanting to draw something inspired from that video for a long time: two swarms meeting each other. When I saw this week’s suggestion it was like a kick in the butt to actually start working on it.

It’s not finished, this is a preliminary sketch to figure out how all the elements would fit together. I need to find better sardine reference photos (photos of them alive ), but it’s coming together. In the end, I want this to be a diorama. 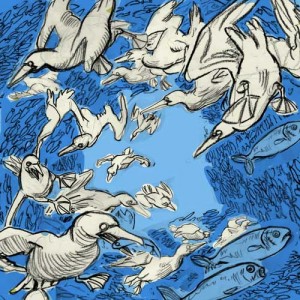 When i need to draw crowds (or swarms), i typically sketch out individuals first, then i scan all the sketches and collage them together in photoshop. Although I have a rough idea of the composition, I usually hammer it out on photoshop, moving the individuals resizing them, and duplicating them. Once I’m done comping it in photoshop, i would then print out the drawing and retrace it, so everything meshes flawlessly, and to differentiate the individuals i’ve cloned.

On a side note, the birds in the picture (gannet) are called “fou de bassan” in french. The french name is actually kind of colorful, it means “the crazy (bird) of the isle of Bass Rock (in Scotland)”. It ‘s crazy because of the way it dives into the sea to get the fish. I read somewhere the airplane Concord’s design was inspired from the bird (it pulls back its wings when entering the water, it looks like a torpedo). Very cool birds!